Kale chips.  Some people have heard of them, some haven't.  I first heard about kale (boerenkool in Dutch :) ) when my family started growing them on the farm.  I never ate it because I dislike bitter vegetables.  I can eat the green part of bok choy, but arugula, frisee, alfafa sprouts, watercress, bittermelon...thanks, but no thanks.  A lot of people told us they boil it in stews and soups (boerenkool met worst might be something I could cook AND eat), many juiced it and a few mentioned kale chips.  Really?  Some cabbage chips?  Nasty.... That's what I thought until I saw kale this past Tuesday and figured, what the hey, it's $2.00 for a package, I can give it a go.  I'm trying to limit my starch intake as much as possible and if I have to have something, I try to make it rice or potatoes; energy from carbohydrates comes in the form of fresh fruit and vegetables.  I have noticed when I overdose on my beloved cookies, quick breads, cheesecakes and various desserts, my eczema flares and I break out something crazy.  It's nothing as major as celiac disease, but I think a lot of us have a wheat or gluten intolerance and don't really realize the cause.  Google "gluten intolerance" or "celiac disease" and you'll find a lot of interesting reading.  I never really knew how much gluten appears in "normal" things until I did some reading.


Anyhoooooo....back to the kale chips!  After Googling "kale chips" and coming up with hundreds of results, I sort of took the average in my head and came up with the concoction below.  They were all basically the same, dry leaves, coat with oil, bake, but what varied was the temperature and seasonings!


I removed the ribs from the kale chips with a knife and cut/tore them into 2" pieces.  I dried them thoroughly in my salad spinner several times as a lot of water got trapped in the curly leaves.  I massaged them with canola oil (I didn't have olive oil), a bit of salt and pepper and parmesan cheese and made sure every part of the leaf had a bit of oil on it.  I cranked the oven to a medium 300 degrees, wrapped two cookie sheets with foil and laid the kale chips out in a single layer, with a little space to breath in between each piece.  I baked for about 25-30 minutes (watch carefully, all the recipes say they go from crispy to burnt in moments).


Here they are before: 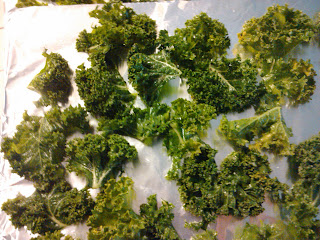 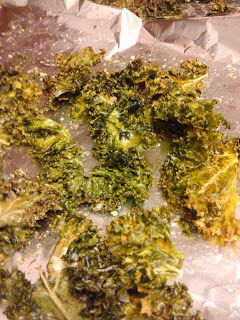 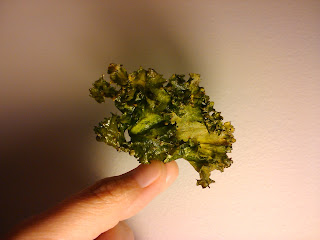 How did they taste?  I tried them when they were about 2/3 of the way done.  EW GROSS!!!  Bitter, mineral-y taste, soggy, kinda limp.  BLEH!!  But once they were completely crisped up....YUM!  Well, a "not bad for a fluffy veggie".  The chips don't look the best once done, but they really are pretty good.  A definite alternative to potato chips and very easy, low prep snack in which you control the salt and calories and a bit healthier than straight parmesan crisps.  I think next time, I'll tear the kale into smaller pieces and put them in a big zip top bag with the oil and seasonings to make clean up (of my hands) easier.  The chips are extremely fragile when done so I'm storing mine in some plastic containers.  I think I'll guinea pig my coworkers and see what they think!