I got up disgustingly early (for me) and headed into Chinatown to my favorite manapua place called Char Hung Sut. It's on 64 N. Pauahi Street (phone: 538-3335) to get goodies to celebrate B&B's birthday on Monday.  Char Hung Sut is closed Tuesdays and open at 5.30am so they tend to sell out quickly. Remember, the chinese mustard isn't free (5 cents a container) so order it when you order everything else so they can toss it in the box for you then wrap it up in that plastic rope that never seems to run out.

This is yap chai (3 different types) - I have never had this before but the chinese grandma said it's very good so how could I resist? It's a steamed rice concoction with different fillings wrapped in a leaf. The bottom is the layered rice cake - lovely, sweet, sticky yummy layers (though when I was a kid, I could've sworn that was ONE piece, and not two....Ah, these tough economic times we live in) that you peel and eat one layer at a time. OK, you don't *really* eat it that way, but I'm still a kid at heart so I do. 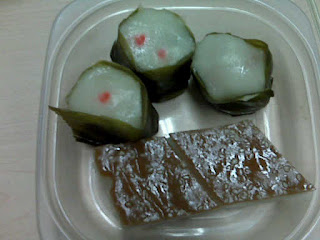 This is my personal favorite - mai tai soo. It's got the water chestnut, barbeque pork filling but it's in a flakey pie-crust type of shell and baked, not steamed. If you're not a fan of half moons and pepeiau, don't get this (I didn't get any because no one else likes that water chestnut filling). Add some hot chinese mustard sauce and nom nom nom nom. 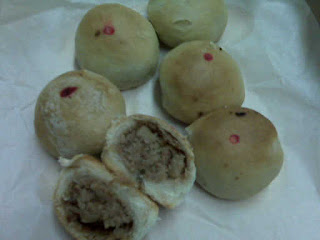 Your "standard" steamed manapua (also known as char siu bao, steamed pork buns). I like the filling, all barbeque pork. None of that green onions or water chestnut or anything else crap. Straight shredded piggy. Lots of fluffy white dough and the gratuitous paper that won't come off. If you need to reheat, wrap in a damp paper towel and microwave for a minute or so, until hot. 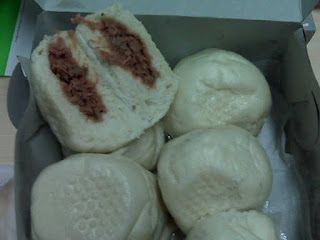 And the boys' favorite. Pork hash. Plain pork in a won ton wrapper (I think) and steamed. Onolicious. Eating 4 of these in about 10 minutes is quite easy to do. Not that I did that for breakfast just 5 minutes ago. (looks innocent). Really, I only bought two dozen...... HA HA. 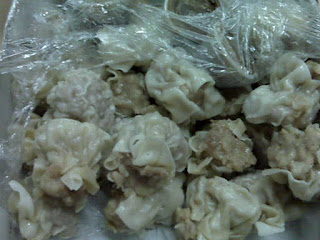 12.15pm - I ate one of them yap chais, the one with a single red dot. It was sweet rather than savory, a little sweet mochi (glutinous) rice filled with a chinese style coconut paste (think of them coconut candies...) Yum!